From the recently held course in Münster, we present the recorded papers by two ESRs - Elisa Bellucci and Andrea Bianchi - on topics central to understanding the reception of Origen' philosophy of freedom in the 17th century.

On the recently held course in Münster, two ESRs presented their research on topics central to understanding the reception of Origen' philosophy of freedom in the 17th century.

Andrea Bianchi studies Origenian influence on Dutch Arminianism, uncovering the role and the extent that the ideas of Origen from Alexandria had on theological-philosophical debates of the seventeenth century, particularly regarding controversies that were based or had implications on different ways of understanding the notion of “freedom”. More specifically, among the variety of actors and groups of that time, he focuses especially on the writings of Jean Le Clerc (1657-1736), a very influential but highly under-researched literate, philosopher and Arminian theologian. Listen to some of his insights here:

Elisa Bellucci seeks to uncover which seeds contributed to shaping the so-called German Radical Pietism strand by exploring and clarifying the context and the influences that played a key role in Eleonora Petersen’s thought. Eleonora Petersen became acquainted with Pietism via two main exponents of conventicles movement in Frankfurt, Spener and Schutz, but also other ideas influenced her works, including Orthodox-Protestant theology and the Jewish text of Cabbala. Thrigh these channels, she investiges to which degree Origen directly or indirectly impacted Radical Pietism. Click here, if you want to hear some of her results: 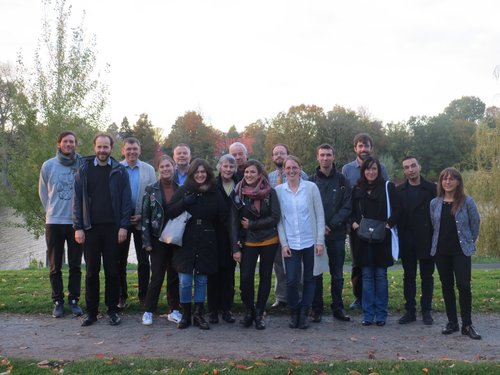 The ITN participants in the course.