In mid-February, the ESRs at the University of Bristol, Ilaria Scarponi and Sara Contini, received a visit from Dr. Olga Alieva from the National Research University HSE in Moscow. This was a very fruitful experience for the fellows - read their report to learn why.

- by Sara Contini and Ilaria Scarponi

In mid-February, the ESRs at the University of Bristol, Ilaria Scarponi and Sara Contini, received a visit from Dr. Olga Alieva, Associate Professor in Philosophy at the National Research University HSE in Moscow, and Editor-in-Chief at the Museum Graeco-Latinum Publishing House. Dr. Alieva’s research interests include the reception of Origen in the Cappadocians (Greek Christian authors from the second half of the 4th century) and genres of philosophical literature in early Christianity.

On February 12, Dr. Alieva delivered a seminar titled: “Academic Freedom in the Field of Theology and Patristics” at the Department of Religion and Theology. She outlined the main trends which have taken shape in post-Soviet academia, with a particular focus on the challenge presented by the discussion of theological themes within a secular milieu. 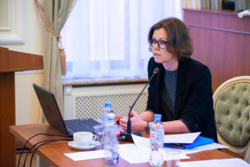 The next day, she met with Ilaria for a close reading of Origen’s exegesis of Romans 9, where Paul discusses the biblical episode of Jacob and Esau (Gen 25:20-34) and the topic of divine election. Dr. Alieva helped Ilaria focus on Origen’s interpretation of this chapter of Paul’s epistle: Origen reads Rom 9 as attributed by Paul to the opponent that Paul engages in the letter.

Then, following an “aperitivo” with Ilaria and Sara in the lovely neighborhood of Clifton, Dr. Alieva got to meet the PhDs of the Department of Classics and Ancient History. During the meeting, Dr. Alieva discussed what it means to be a Humanities scholar in 21st century Russia, dealing in particular with society’s perception of the relationship between Humanities and Sciences. Then, Dr. Alieva delivered a paper focused on the contemplation of the divine in the writings of the Cappadocian Father Basil of Caesarea, giving attention to the relationship between Basil and Origen concerning this topic.

On February 14, sessions with Ilaria and Sara took place. Dr. Alieva and Sara discussed the topic of dignitas (“dignity”) in the Latin translations of Origen’s treatise De Principiis, that Rufinus and Jerome produced around 400. Special attention was given to the correct use of philosophical terminology, the engagement with secondary literature, and the close reading of Jerome’s and Rufinus’ competing versions of passages of the treatise dedicated to the dignity of the Holy Spirit. Dr. Alieva and Ilaria discussed th

e reception of Origen by Pelagius. Pelagius was a British Christian author, whose ideas especially on human freedom were heavily criticized by Jerome and Augustine between 395 and 421. Ilaria and Sara found these meetings most beneficial to their research, in particular as far as the methodology of a rigorous reading of Origen’s text and the understanding of his (and his translators’) strategies and purposes are concerned. Dr. Alieva’s visit was extremely useful to Ilaria and Sara not only as regards their research, but also as regards their personal formation as scholars of the Humanities. This visit gave Ilaria and Sara the opportunity to reflect upon the significance of being a Humanities scholar in today’s world from an international perspective and also gave them the opportunity to focus on the steps to be taken towards a fulfilling and successful career in this field.

After the tutoring sessions, following a tradition established last year in Reading with Professor Samuel Fernández, Ilaria and Sara took the Origen expert out to a Valentine’s Day dinner. Leave it to the PhDs of Classics to look spectacularly out of place among loving couples!

During the following days of her stay in Bristol, Dr. Alieva had the opportunity to meet several scholars at the University of Bristol. A particular focus of these meetings was the exchange of different working practices in Moscow and Bristol, the nature of interdisciplinary activities at both places, and the potential for future collaborations.