Feedback on the ITN course and conference in Canterbury 2017

In February 2017, four ITN ESRs participated in the course and conference “Ancient Thought from a Global Perspective: Human Freedom and Dignity” in Canterbury. Together with the organizer, Prof. Karla Pollmann, they offer some interesting thoughts on their experiences.

Feedback on the ITN course and conference

“Ancient Thought from a Global Perspective: Human Freedom and Dignity”

Participating in the ITN course and conference “Ancient Thought from a Global Perspective: Human Freedom and Dignity” held in Canterbury from Feb 25th to Mar 1st, 2017, was a unique experience. The conference was characterized not only by high-quality talks but also by an outstanding setting: in fact, it took place within the walls of the Cathedral of Canterbury, which is a bastion of culture and the mother church of the entire Anglican community of believers.

The conference was also enriched by a visit to the Canterbury Cathedral Archives, which contain many palaeographic treasures and where the head archivist gave us insights into the issues of conservation and consultation of ancient books. Also, we had the privilege to enter the restoration workshop where some young interns, a new generation of heritage custodians, gave us a taste of the very ‘carnal’ life of books.

Claire and Ilaria were given the opportunity to participate in the Canterbury conference both as organizers and as speakers. Taking care of practical aspects, such as registering the attendees for the conference and assisting the participants in their needs, has enabled us to develop our organizational skills. Furthermore, giving a talk respectively about the concepts of human freedom and of dignity in Origen’s thought has enabled us to gain experience as speakers and to receive feedback on our work from a distinguished audience. While participating in the conference Claire and Ilaria – as project ESRs who are currently working on the reception of Origen in medieval authors – were provided with a perfect opportunity to attend presentations closely related to the topic of our research and to receive benefits by the great expertise of international speakers. 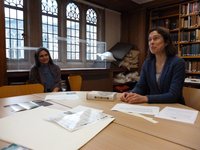 The conference has focussed not only on Origen and on the authors who drew on him in Late Antiquity and the Middle Ages regarding the concepts of human freedom and dignity, but it has been widened also by presentations engaging with the global potential of early Christian thought from various angles – and from various contexts: we have dealt with Christianity and the topics of human freedom and dignity in Brazil, China and Japan. The guests being from various academic disciplines (Classics, Ancient History, Ancient Philosophy, Theology) the central themes of our ITN project have been approached from different perspectives, and the influence of patristics and classics authors has been shown by innovative clusters and unexpected receptions. One contribution challenged our project from the point of view of postcolonial theory which questions a deductive method of academic investigation that attempts to trace present day ideas, customs, etc., back to one single true source. Postcolonial theory invites us to think about the interrelated development of various strands of thought that offer various combinations in different periods of time, and sometimes even different ways of configuring values, notions of power, etc. in the same period of time. The implications for our project will still have to be explored by us in more details.

We truly enjoyed that each talk was followed by a moment of exchange of ideas among the participants, both ESRs and scholars. The moments of discussion were an opportunity for human and intellectual enrichment; also, they were useful with a view to the project, especially considering the concluding discussion and outlook held on the 28th, where the ESRs were invited by Professor Pollmann to share thoughts and ask questions related to our research in the light of the issued addressed during the conference.

As far as the concluding discussion is concerned, it is worth mentioning the few crystallized points (identified by Professor Karla Pollmann) which are important on a general level for our project and which it would be important to discuss at the Aarhus Network Seminar on June 12th and 13th.

A first point concerns the concept of human dignity. While human freedom seems to be comparatively easy to fix and grasp as a concept and to define conceptually for our purposes, this process is much more complicated with regards to the concept of dignity. There is no working definition easily to be had in Origen, and it is not clear how to combine this explicitly with freedom. Further, there could be implicit remarks that could be combined with dignity, in particular when the human being is defined as imago dei (‘God’s image’), but this is conceptually complicated as there is a risk of anachronism. Finally, there needs to be a distinction between social connotations of dignity versus internalized, philosophical ones. Morten, Claire and Ilaria have worked a bit on this: while presenting the results of our work to the entire group in due course, it would be good to hear the thoughts of the other ESRs as well in this regard.

A second point concerns the difficult detection of “Origen” in the authors investigated by us ESRs (even Bernard of Clairvaux is quite resistant to this). It would be very helpful for us ESRs to be given a methodology which reflects this issue, e.g. providing some examples of texts where Origen is not technically received but his thought is still somehow present, then contrasting this with a more direct reception and ideally developing criteria to make this a robust and agreed process.

A third point concerns the question of publication, arisen informally during the discussion. Currently, Claire and Ilaria are working on the concepts of human freedom and dignity in Origen’s thought (and probably Morten will also collaborate more closely with them). Hence, if we worked on a piece of writing together and a separate publication were to arise, we were wondering whether co-authorship would be appropriate, perhaps with other scholars involved as well.

A fourth (and final) point discussed was time versus workload. We ESRs have several duties and need to write a PhD, and it is reasonable to ask whether this could be done in three years’ time.