From West to East - Origeniana in Jerusalem

Two of the senior researchers in the ITN had arranged a panel within the ITN framework at the Origeniana conference in Jerusalem with a focus on the Body and Soul in Origen's theology. A number of the ESRs attended the conference, and they have written about their experiences in this report.

From West to East - Origeniana in Jerusalem

Our PhD journey took us this time all the way to Jerusalem: yes Jerusalem! But why? What has Origen got to do with Jerusalem? This question, and many others, were explored and debated intensely in the last week of June 2017, where a large group of Origenian scholars gathered in the beautiful frame of Jerusalem to attend the Origeniana Duodecima. The conference takes place every four years, the last one being held in Aarhus (Denmark) in 2013, a propitious occasion for us all in the project after all: after all, it was the nesting box where our ITN project started taking its proper shape.

Today, four years later, some of the first results are visible! Five ESR's (Andrea, Elisa, Johannes, Josh and Karen) and two project associated researchers (Katarina and Maria) journeyed to Jerusalem to attend the conference and to meet with professors, students and researchers of Origen and scholars of Early Christianity. The beautiful frame of the Hebrew University of Jerusalem on Mount Scopus with the spectacular view of the entire city of Jerusalem (and all the way up to Jordan from looking East!) fostered some excellent discussions and made us feel very privileged. The 3-day conference was structured with plenary sessions and parallel panels, offering a varied multitude of topics and approaches.

The numbers of participants allowed a lively discussion in each panel, with people coming from different 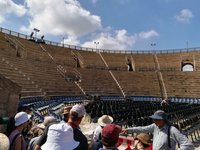 fields such as philosophy, theology, archaeology and more, sharing opinions and perspectives. One of these panels was dedicated to our ITN project and organized by members of our ITN Supervisory Board, Professors Fürst, Jacobsen and Karfíková, and focused on the complex issue of body and mind in Origen's thought. Prof. Fürst and Prof. Jacobsen, having different opinions on this same topic, opened a very animated dialog among the audience, continued by the presentation of Prof. Karfíková on the issue of pre-existence of the soul in Origen's Commentary on Romans. Elisa also had the opportunity to present part of her project on Hans Urs von Balthasar and Origen on the spiritual senses, an approach which provides a different perspective on the issue of corporeality.

After three days of intense scholarly debate and intellectual inputs, we needed to get active and follow in the footsteps of Origen in the Holy Land. So, on the fourth day, we journeyed out for a trip to Cesarea, the town where Origen spent 20 years of his life: we had the opportunity to visit the huge archaeological site of the Roman province, guided by some archeological scholars who personally worked on the site.

Attending the Origeniana has been a both scientifically rewarding and a personally enriching experience for the ESRs: it was a great opportunity to see different perspectives and methodologies used in action to look at Origen but also different ways to do “reception studies.” Moreover, it was an occasion to meet other professors and researchers who study the author that constitutes the foundation of our project, to communicate the aims of our own project, and to share our results.