History, culture and research in Fulda

Two of our ESRs, Ilaria Scarponi and Sara Contini, recently went on a research visit to Fulda. They participated in the International Colloquium for Early Career Researchers in Early Christianity, led a workshop on their research on Origen, visited the historical archives, met other researchers in their filed, and much more. Read the report of their fascinating experiences in this central German city.

Research visit and colloquium in Fulda

Together with their supervisor, Professor Karla Pollmann, Sara and Ilaria co-organised and participated in a research visit in Fulda from April 8 to 12, 2019. Located in Hesse, central Germany, the city of Fulda is rich in history and culture. Fulda developed around a Benedictine abbey founded in the 8th century and played an important for the spread of Christianity in Germany.

The research visit, sponsored by the project, was held at the Priesterseminar, a 17th-century building located in the heart of the city. The Priesterseminar is home to the Catholic seminary in Fulda. The building offers conference rooms and includes a large library focusing on various subjects, in particular Theology and Church history. The research visit included many academic and cultural activities.

On April 9, Ilaria and Sara took part in the “International Colloquium for Early Career Researchers in Early Christianity”, held in the Priesterseminar library. The colloquium, which was arranged by Professors Pollmann (Bristol) and Baumann (Fulda) as a collaboration between the Faculty of Arts at the University of Bristol and the Fulda Faculty of Theology, gathered twelve presenters from different countries. The speakers delved into a wide range of subjects dealing with Early Christianity, including ancient Christian poetry (Lorenzo Livorsi, Bristol), martyrological writings (Fiona McMeekin, Bristol), Origen and his legacy in the West (Ilaria Scarponi, Bristol; Sara Contini, Bristol; Marion Marb, Fulda), the writings and thought of Augustine (Guntram Förster, Würzburg; Karla Pollmann, Bristol; Notker Baumann, Fulda). Further presentations focused on the works of Tertullian (Sören vom Schloß, Fulda), the relationship between Emperor Constantine and Lactantius (Michael Bußer, Würzburg, Fulda), iconoclasm in the Early Church (Nicolas Kusser, Würzburg), and the connection between the concepts of time and Divinity in Antiquity and Early Christianity (Amy Nizolek, Bristol). The event was attended by many students of the Fulda Theology Faculty and was enriched by the presence of Professors Matthew Nicholls (St John’s College, Oxford) and Christian Tornau (University of Würzburg). Each of the professors chaired a session in the colloquium and took part in the lively discussion following the presentations. The quality of the papers delivered in the colloquium was high, and the debate was stimulating for both presenters and attendees. The presentation was followed by a dinner at the Priesterseminar, where networking and further discussion on the subjects dealt during the colloquium took place. The event was a huge success and marked the beginning of a fruitful cooperation between Bristol University and Fulda Theology Faculty in the fields of Classics and Theology.

On April 10, Ilaria and Sara, their supervisor Professor Karla Pollmann and their fellow researchers from Bristol University, Fiona McMeekin, Amy Nizolek and Lorenzo Livorsi, undertook a guided tour of the library in the Priesterseminar. Dr Alessandra Sorbello Staub, Head Librarian, introduced the group to the history of the library and its content. During the early Middle Ages, Fulda was an important seat of learning in Europe. The copyists active in Fulda Abbey produced a huge library, which was famous during the Humanistic period until its destruction during the 30 Year War (17th century). Today, the professionals working in the library of Fulda endeavour to identify and catalogue what remains of the ancient library. Over 2,000 modern and medieval documents, manuscripts and archives are available there. Dr Sorbello showed the group two 9th-century manuscripts of rare beauty included in the collection. The first manuscript contained a section of Boethius, De philosophiae consolatione, whereas the second one contained an excerpt from one of the prefaces of Jerome to his translations of the Hebrew Bible.

After the library tour, the group attended a mass celebrated by Bishop Emeritus Heinz Josef Algermissen in St Michael’s Church, located in front of the Priesterseminar and next to the majestic Baroque cathedral of Fulda. The church was founded during the 9th century and built in the Carolingian architectural style. The church was later expanded, but some parts including the crypt were preserved in their original style.

Ilaria, Amy, Professor Karla Pollmann, Professor Matthew Nicholls and his wife contributed to the liturgical celebration by singing two pieces a capella. The group performed "If Ye Love Me" and “Sicut cervus”, two four-part motets produced in the 16th century by the English composer Thomas Tallis and the Italian composer Giovanni Pierluigi da Palestrina, respectively. Singing the two motets was an amazing experience for the performers. The voices of the singers somehow echoed those of the monks dwelling and praying there throughout the centuries. After the mass, Ilaria, Sara and the others undertook a guided tour of the church kindly offered by the Bishop, who then joined the group for dinner at the Priesterseminar.

The following day (April 11st) was dedicated to a workshop led by Ilaria and Sara. Relevant passages from the writings of Origen and later authors were read and discussed. Ilaria presented some excerpts dealing with Jacob’s election in Origen’s On First Principles and Commentary on Romans, and also from the commentaries on Romans by the 4th-5th century authors Ambrosiaster, Augustine, Pelagius, and the anonymous Pelagian author of the treatise De Induratione. These authors explain Jacobs’ election by fighting against deterministic interpretations and by stressing that Jacob’s choices and effort played a role in this. Ilaria’s aim was to reflect upon the exegesis provided by the authors considered and discuss whether and to what extent Origen’s interpretation was received and assimilated by later Latin authors. 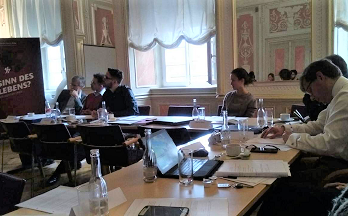 On her part, Sara discussed passages from Origen’s Greek and Latin writings regarding the progress of the soul in the Logos, from the “dignity of the image” to the union with God. Sara also focused on the 4th-5th-century author Jerome and his criticism of Origen’s view of the dignity of the soul and its progress. Finally, Sara reflected upon the significance of the term “dignity” in the second book of Arnobius of Sicca’s Against the Pagans, written before 311. In this text, the author targets those Christians who, following Plato, think that the soul is immortal, pre-exists the body and is superior to animals because of reason.

The workshop saw the participation of Fiona Mc Meekin, Amy Nizolek, Professor Karla Pollmann and Matthew Nicholls. The debate about the selected passages was lively and of great help for Sara and Ilaria, who received many comments and observations on texts that are highly important for their work. After the workshop, the group enjoyed some free time to explore Fulda city centre and appreciate its historical buildings.

The research visit in Fulda was inspirational for Ilaria and Sara from different viewpoints. From an academic standpoint, participating in an international colloquium together with representatives of the theological faculties of Fulda and Würzburg was enriching for Sara and Ilaria, because it gave them the opportunity to present their work and receive input from other students and scholars of the field. Commenting on relevant passages from the writings of Origen and his readers during the workshop held on April 11th was equally fruitful, as Sara and Ilaria discussed some of the texts that are relevant for their thesis, and this helped clarify issues they encounter during their everyday work. The event in Fulda was important for Sara and Ilaria from an intellectual and personal point of view as well. Sara and Ilaria came into contact with the prestigious cultural past of an important city in Germany. They saw some manuscripts from the medieval library in Fulda and enjoyed the beauty of the city centre in their free time. During the various activities promoted by the event, Sara and Ilaria were given the opportunity to get to know many international scholars and students, and the Bishop, and to do networking. Also, Ilaria was among the performers of the two musical pieces sung in St. Michael’s Church. This was a good experience for Ilaria, as music helps performers and listeners to connect emotionally and foster friendship and understanding between them. Ilaria and Sara are very happy about the experience and look forward to further developments in the relationship between Bristol and Fulda.