Ilaria Scarponi has written an article about her life as an ITN ESR in Reading, England, and about her research topic, which focuses on the reception of Origen’s thought in the Early Middle Ages from Augustine to John Eriugena.

Some notes on my life in Reading and on my research

Living and carrying out my research in Reading, Berkshire, is proving to be a fantastic experience for me, both from a personal and an academic point of view.

The city is peaceful and welcoming, typically English in its architecture and in its colors, but enriched by the presence and contribution of different cultures. The University of Reading, which is hosting my place as an ESR on the “History of Human Freedom and Dignity in Western Civilization” project, is a very good example in this regard, given its international students and teaching staff – which I am proud to say I am part of. During the Spring Term 2017, I have been given the opportunity to teach an Ancient Poetry seminar to 2nd-year students: a truly exciting and enriching experience for me!

The University of Reading has four campuses: I am based in the Whiteknights Campus, the biggest one, that hosts the Classics Department and more generally the School of Humanities, together with the library and its roughly one million volumes. The University is relatively recent – it was built at the end of the 19th century and formally established in the mid-1920s – but is nevertheless prestigious and very well known for the quality of its courses, the top quality research and its high quality activities such as seminars and conferences, but also for extra academic activities: for instance the University of Reading Chamber Choir, which I am part of, participates in high-quality concerts during the academic year which substantially contribute to the cultural life of the University and more generally of the city.

As far as my research is concerned, my project (number 2) delves on the reception of Origen’s thought in the Early Middle Ages from Augustine to John Eriugena (810-877) and is supervised by the Head of School of Humanities Professor Karla Pollmann. In the past few months, I focussed on the figure of Pope Saint Gregory I, commonly known as Saint Gregory the Great, who was the pope of the Catholic Church from 590 to his death in 604. Gregory deals with Origen as Western Christian culture does in general: Origen’s name tends not to be named explicitly, and his theological stances are usually rejected, as he was condemned at the Second Council of Constantinople. In striking contrast, Origen’s exegetical work is appreciated and re-used; that is why I carried out a comparative study between Origen’s Commentary and Homilies on the Song of Songs and Gregory’s Commentary on the same biblical book, which undoubtedly draws on Origen – a truly fascinating textual research, as it is convenient to my philological education, in order to identify possible links between Origen’s and Gregory’s stances on human freedom and dignity.

At the moment, though, I am more specifically working on Origen. My colleague Claire (the other ESR on the project who is living in Reading while carrying out the research project number 3, about Bernard of Clairvaux) and I have undertaken a study concerning the foundations of our reception investigation, with a view to our participation in the ITN course and conference “Ancient Thought from a Global Perspective: Human Freedom and Dignity” held in Canterbury from Feb 25th to Mar 1st 2017; we decided then to go on studying Origen’s works aiming to capture his thought about the topics of human freedom and dignity and to arrive at a definition of these two concepts, since this will indeed be helpful to our reception study. 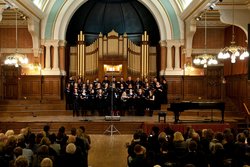 I couldn’t be happier and luckier to work on these stimulating topics, to be part of the staff of the University of Reading and to be immersed in the English culture. In fact, another advantage of living and working in Reading is the possibility to get to London and Oxford easily: the libraries in London and the Old Bodleian are undoubtedly the best places to study Origen and his reception!