My Stay in Prague - the adventures of an ESR

One of our ESRs, Ilaria Scarponi, recently completed her secondment at the Charles University in Prague. In this report, she writes about the experiences and academic and social adventures she had there during the three months.

My Stay in Prague

I have been lucky enough to stay in Prague between November 2017 and January 2018, when I completed my secondment at the Protestant Theological Faculty of the Charles University under the supervision of Prof. Lenka Karfíková. My subproject deals with the reception of Origen – especially, the reception of his ideas on human freedom – in the Early Medieval period. Prof. Karfíková and I had regular meetings to discuss my work and my further steps. I was given great advice and support regarding the reception aspect of my research, as I received feedback not only by scholars in Prague but also from outside the capital. In fact, Prof. Karfíková kindly gave me the contact details of Prof. Vít Hušek from Sts Cyril and Methodius Faculty of Theology in Olomouc – a lovely city in Moravia, in the east of the Czech Republic. Prof. Hušek and I met at the end of January and discussed the possible influences of Origen’s ideas on freedom in the so-called Semi-Pelagian context (Gaul, 4th-5th century AD).

Living in Prague was for me a positive and meaningful experience. It goes without saying that the city of Prague is beautiful and unique from an architectural and historical point of view. In this regard, I would like to mention that the night I arrived, by chance I ended up in front of the Stavovské Divadlo (‘The Estates Theatre’), where the world première of Don Giovanni by W.A. Mozart took place. This was indeed an appreciated welcome. As far as the Protestant Theological Faculty is concerned, I can tell that it is an ideal study place. I was given a desk, and it was very easy to access useful study material, as the library was located in the basement of the same building. My stay in Prague was also a good occasion to do some networking within the project, as Morten (who is working on subproject 1, closely related to my own research, and is based at Charles University), Renze (who is working on subproject 14, and was completing his own secondment at Charles University at the same time as me) and I spent much time together, sharing thoughts regarding our work and discovering the beauties of the city. Renze and I shared the same office and were accommodated at the Charles University accommodation facility in Jinonice, as kindly suggested by the Protestant Theological Faculty Administration team, and particularly by the very supportive Ms Věra Fritzová. The administration team organised high-quality cultural events for foreign students such as a guided tour to Terezin, a concentration camp one driving hour away from Prague, which I attended together with a group of American scholars and students from the Columbia Theological Seminary in Decatur, Georgia – an institution that is twinned with the Prague Protestant Theological Faculty. Visiting Terezin was one of the most powerful experiences of my life.

Before concluding, I would like to mention that during my stay in Prague I was given the opportunity to participate both as a speaker and as a listener in the PhD seminars in Philosophy held at the Protestant 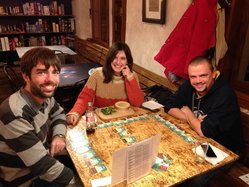 Theological Faculty from November 2017 to January 2018. On the occasion of Renze’s and my presence at the Faculty, the seminars were held in English. Renze and I had the opportunity to hear very interesting presentations from our Czech colleagues, and every presentation was followed by an open discussion and a convivial time at the Faculty café while enjoying typical Czech food. On November 29th, 2017, I gave my own presentation focusing on Origen’s ideas on freedom, followed by an inspiring discussion, also enriched by the presence of Prof. Theo Kobusch. On the same occasion, I got to meet Prof. Vladimír Mikeš, an expert on Stoic thought who agreed to meet Morten and me separately so as to read together the Stoic-flavoured introductory paragraphs of Origen’s On First Principles 3.1 – a very important text concerning the issue of freedom in Origen’s thought – and to give us some guidance regarding the Stoic understanding of the central terms ἐφ’ἡμῖν (‘what is up to us’), αὐτεξούσιον (‘what is autonomous’) and ἐλευθερία (‘freedom’).

My stay in Prague is now over, as I have just returned to Reading, where I am based. I will carry out my research being now more experienced and able than when I left in November, thanks to the knowledge acquired during my stay in the beautiful Czech capital.