Origen pays another visit to Cambridge

On 25th November, the second Cambridge workshop “Theology and Philosophy in Origenism Old and New” took place. As always a relevant event for our ITN participants, but this time also for mathematicians. Read the report and learn more about the workshop.

Origen pays another visit to Cambridge

We ESRs, as well as many other Origen scholars, are always excited by every occasion that presents itself for either listening to other’s work on the Alexandrine or present our own projects or both. Cambridge was (once again), the location where we were offered one of these opportunities. For most of us, the city was easy to reach by a 30 minutes train ride from London Stansted Airport, something that makes Cambridge a very convenient place to meet, coming from different corners of Europe. Most importantly, however, the “Cambridge Centre for the Study of Platonism,” directed by Prof.  Douglas Hedley, and the recently founded “Origen Study Group,” which is part of it, directed by Dr. Christian Hengstermann, combine patristic expertise with theological and philosophical grounding. 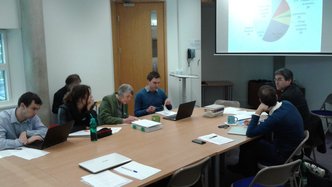 So it was that the Cambridge Workshop “Theology and Philosophy in Origenism Old and New,” in his second edition this fall, took place on 25 November 2017. Like the previous and first meeting of this kind (of March 2017, see the related article), this workshop too was semi-structured, with a full hour dedicated to each topic, which was normally equally divided into a formal lecture and time for questions and debates. The atmosphere was however warm and relaxed at the same time. Among the participants, there were contributors from Cambridge and Oxford Universities but also Münster and Milan, as well as specialists in the field and students of philosophy and theology. Surprisingly, in one of those “corridor encounters” during breaks, we also met undergraduate students from mathematics that had come to learn more about early modern reception!

The day started with an opening lecture by Prof. Hedley on Werner Beierwaltes and his hermeneutics of Christian Platonism. Prof. Hedley had personally worked with him and offered a first-hand account of this important figure of Christian Platonism. With him, we discussed texts taken from Beierwaltes’ “Platonismus im Christentum” (Frankfurt: Klostermann 2001, 7-16), especially crucial topics of the mutual interdependence of philosophy and theology and Beierwaltes’ “hermeneutical axiom” according to which concepts cannot be simply “formally” utilized in theology, but one needs to take account of their contextual philosophical load. Especially for him as a scholar of the reception of Platonic philosophy in Christianity, but also for us working in the field of Origen’s reception, this was an important reminder that although theology changes over time, some of its content is transmitted through concepts that are attached to philosophically charged linguistic expressions.

The workshop then moved on to the other researchers, who discussed their particular projects. Ryan Haecker, from Cambridge University, focused on Origen’s angelology, and particularly on a speculative method rather than a more traditional empirical angelology, reviewing the ontology of angels in ancient authors, not only in Origen. It was then time for Andrea Bianchi, from the Catholic University of Milan, an “ESR” of this ITN project, who presented a particular aspect of his work on Jean Le Clerc, clarifying the position of the Arminian on Origen’s hermeneutics, given the fact that Le Clerc calls Origen on one occasion “the monkey of Philo of Alexandria” (listen to the entire presentation here). Furthermore, Bogdan Deznan, from the University of Bucharest, showed us parallels in Henry More and Origen in what concerns their Trinitarian structure and covered other different aspects of the ontology of the Logos. 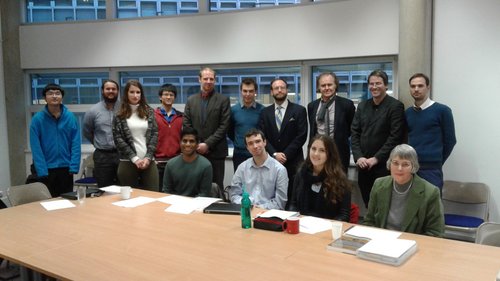 Also from the University of Bucharest, Remus Manoila presented his research of the reception of Origen in Isaac Newton, showing us his work with original sources, like Newton’s annotated Bible and different aspects of his relationship with Origen. After the final break, Marilyn Lewis, from the University of Bristol, an “associated researcher” of this ITN project, delighted the group once again with her historical work on Henry Hallywell, focusing this time on the 6<font>th</font> chapter of his work “Deus Justificatus” and evaluating, among other things, the possible dependency of Hallywell from either Henry Hammond or Arminius. The final talk was given by Joshua Roe, from the University of Münster, also an “ESR” of this ITN project, who proposed a methodological discussion on how to do reception research (especially, in his particular case, of Schelling and Origen), proposing an alternative to “Quellenforschung” and moving the discussion to a more post-modern ground. A final discussion among all participants wrapped up the day and concluded the workshop.

It was, once again, a mini Origen-marathon, but every lecture has been a valuable one, not only for the learned content but also for the discussions. Often, debates naturally moved from the focus topic of the lecture to a more generalized discussion of our overall ITN projects. We are sure that “Theology and Philosophy in Origenism Old and New 3” is planned for next year, so, what to say: why not attend?